Oxygen can do a favor to synthesize metal-organic frameworks

Metal-organic frameworks, or MOFs, are composed of metal ions periodically surrounded by organic bridging molecules, and these hybrid crystalline frameworks feature a cage-like hollow structure. This unique structure motif offers great potential for a range of applications in energy storage, chemical transformations, optoelectronics, chemiresistive sensing, and (photo)electrocatalysis, among others. Debuted in the early 2000s, MOFs are a fascinating nanomaterial. Though numerous applications exploit MOFs, little has been known as to how oxygen may work in the synthesis of MOFs.

Led by Director Rodney S. Ruoff and senior chemist Dr. Yi Jiang, chemists from the Center for Multidimensional Carbon Materials (CMCM) within the Institute for Basic Science (IBS) located at Ulsan National Institute of Science and Technology (UNIST) in collaboration with their colleagues at UNIST and Sungkyunkwan University (SKKU) have identified how oxygen affects the synthesis of a novel MOF; copper 1,3,5-triamino-2,4,6-benznetriol metal-organic framework [Cu3(TABTO)2-MOF]. Their findings were published in a recent article in the Journal of the American Chemical Society (https://doi.org/10.1021/jacs.0c02389).

“Since organic redox-active ligands are usually sensitive to oxygen, the presence of oxygen is not favored in many organic reactions. However, oxygen can be helpful for the synthesis of some redox-active ligand-based MOFs, but many chemists did not realize this,” notes Dr. Yi Jiang, the first author of the study. The researchers synthesized a 2D conjugated MX2Y2-type (M = metal, X, Y = N, S, O, and X ≠ Y) Cu3(TABTO)2-MOF based on a redox-active ligand (1,3,5-triamino-2,4,6-benzenetriol). The role of oxygen in the synthesis of this MOF was identified by comparing the results from experiments in air and inert gas (argon): Pure Cu3(TABTO)2-MOF was produced in the presence of oxygen, but the Cu3(TABTO)2-MOF together with copper metal was formed if oxygen was absent. Dr. Jiang adds, “Our study suggests that oxygen prevents these ligands from reducing the Cu (I and II) ions to Cu metal, facilitating the synthesis of a pure MOF.”

They also revealed that Cu3(TABTO)2-MOF became electrically conductive after being chemically oxidized by iodine because of the formation of CuI and carriers. It is originally an insulator with almost no electrical conductivity. The iodine-doping generates 0.78 siemens per centimeter of electrical conductivity in the Cu3(TABTO)2-MOF pellet that was synthesized in air. Further experiments and analysis found the metallic characteristics of the materials. 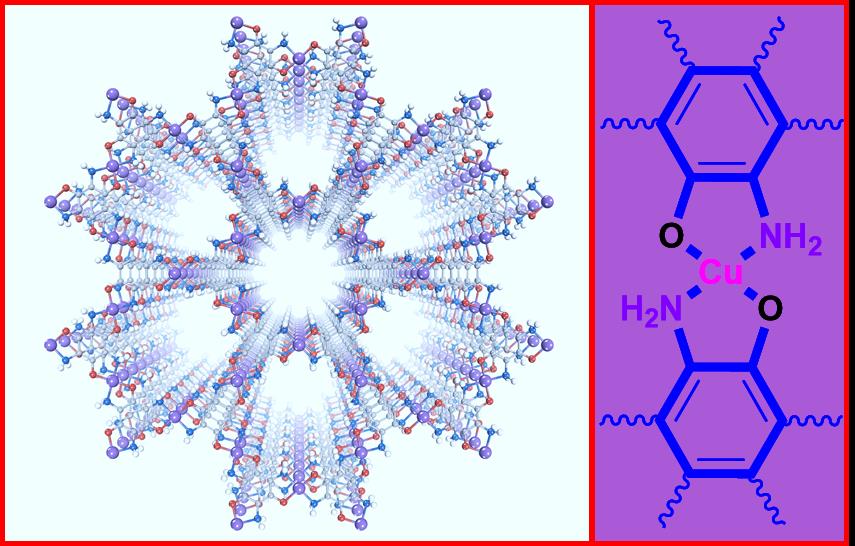 UNIST and SKKU collaborators measured physical properties and did theoretical modeling of this new MOF. Prof. YOO Jung-Woo and his student OH Inseon of the Department of Materials Science and Engineering at UNIST studied the iodine doping-induced electrical conductivity of the Cu3(TABTO)2-MOF. The metallic characteristics of this iodine-doped material were also explored by Prof. HWANG Jungseek and his Postdoctoral Fellow Dr. SEO Yu-Seong of the Department of Physics at Sungkyunkwan University. Prof. KWAK Sang Kyu and his student JOO Se Hun of the School of Energy and Chemical Engineering at UNIST modeled the structure through detailed DFT calculations. This research was supported by IBS, UNIST, Korea Institute of Science and Technology Information (KISTI), and the National Research Foundation of Korea.

*Photo of authors credits to UNIST