27 Oct 2020 / CMCM
Synthesis of New Carbon Material: Diamond-Like Carbon Nanofiber Film
Their findings have been published in the journal ACS Nano on October 14, 2020.

An international team of researchers, led by Distinguished Professor Rodney S. Ruoff (Department of Chemistry) from the Center for Multidimensional Carbon Materials (CMCM), within the Institute for Basic Science (IBS) at UNIST, has synthesized a film composed of densely packed diamond-like carbon nanofibers. As described in a recent article published in the journal ACS Nano, the researchers noted that the new carbon material has a high concentration of tetravalently-bonded carbons (the diamond-like nanofibers have many C atoms with 4 other atoms bonded to them; this is also referred to as “sp3-bonded carbon”).

“The diamond-like carbon nanofiber films were synthesized by heating copper nanoparticles of few nanometers in diameter on a substrate, in acetylene and hydrogen gases,” says Kee Han Lee. “The synthesized fibers were highly dense and formed a film. These densely packed nanofibers could also be separated into a powder form which could potentially broaden their applications.”

In this study, the team was able to identify parameters influencing the packing density of the nanofibers namely the hydrogen gas concentration and the copper nanoparticle catalyst size. The packing density could be significantly increased by adjusting these parameters, which led to the formation of a buckled film. 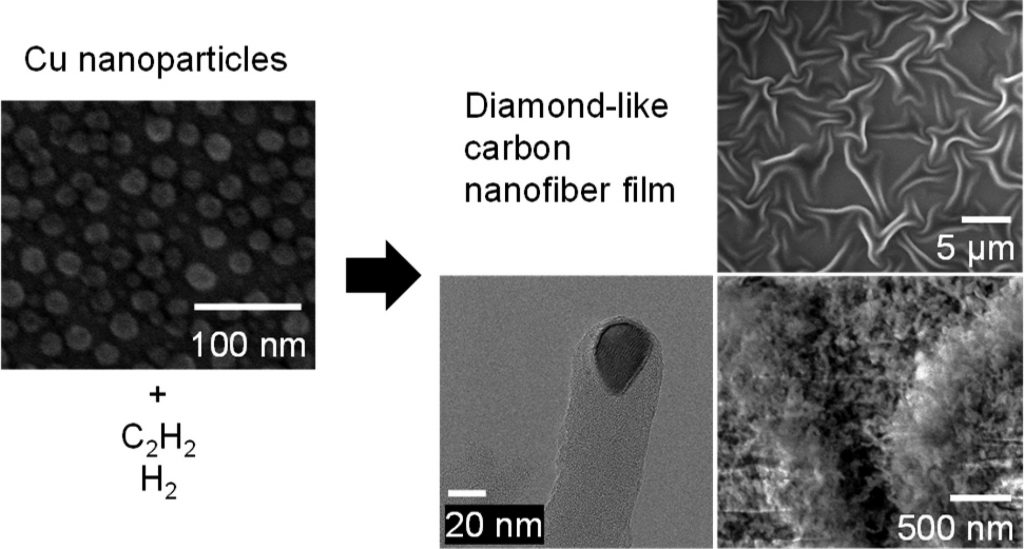 Various techniques such as X-ray Photoelectron Spectroscopy, Solid-state Nuclear Magnetic Resonance, elemental analysis, and Raman spectroscopy elemental composition and chemical bonding structure in these diamond-like nanofibers, and it was found that sp3-bonded carbon atoms (sp3: sp2 carbon atom ratio of about 2) predominate (sp2-bonded C atoms are attached to 3 other atoms rather than 4—like in graphene and graphite—whereas in diamond, all C atoms are “sp3-bonded”). Hydrogen content within the nanofibers of about 25−50 atomic% was determined using Raman spectroscopy and elemental analysis.

“With its high sp3-carbon content, this material is different from other vapor grown carbon nanofibers including nanotubes, which are mostly composed of stacked graphene layers, and carbon nanocoils that have an sp3: sp2 carbon ratio of about 0.25,” explains Sun Hwa Lee.

“We discovered a new form of carbon, and one might expect our work to inspire others to now also study further along this research path,” said Distinguished Professor Ruoff. “We do basic science of new carbon materials among other things, and we are interested in eventually achieving pure diamond fibers, along with further studies of this type of diamond-like carbon nanofiber.”