Just as cloning in biology allows for the creation of one or more replicas of the exact same genes, seeded growth in chemistry can produce a very large metal foil with the exact same surface texture as that of a seeded one. Seeded growth is very popular in synthesizing three-dimensional (3D) single crystals: 3D crystals are always grown into the same shapes, just as salts are invariably cubic single crystals.
Meanwhile, very thin foils/films can grow into different types depending on surface structures. As such, applications can vary. Great efforts had been dedicated to the synthesis of single crystalline metal foils as they have many important applications, such as (i) a substrate to support the synthesis of various two-dimensional (2D) materials, (ii) engineering the properties of the material deposited on it, (iii) allowing for selective catalysis, and (iv) fabricating metal wires with optimized electrical and thermal conductivities. Despite such possibilities, seeded growth has rarely been applied to grow thin films due to a lack of knowledge on how to control the growth process.

Prof. Feng Ding’s group from the Center for Multidimensional Carbon Materials, within the Institute for Basic Science (IBS, South Korea), in collaboration with Prof. Kaihui Liu’s group and Prof. Enge Wang’s group from Peking University, as well as Prof. Dapeng Yu’s group from Southern University of Science and Technology, reported how to give variations to single crystalline metal foils. Via the oxidation-led annealing plus seeded growth strategy, the research team obtained more than 30 types of copper foils the size of A4 paper (~30×21 cm2), which is roughly the same size as US legal. 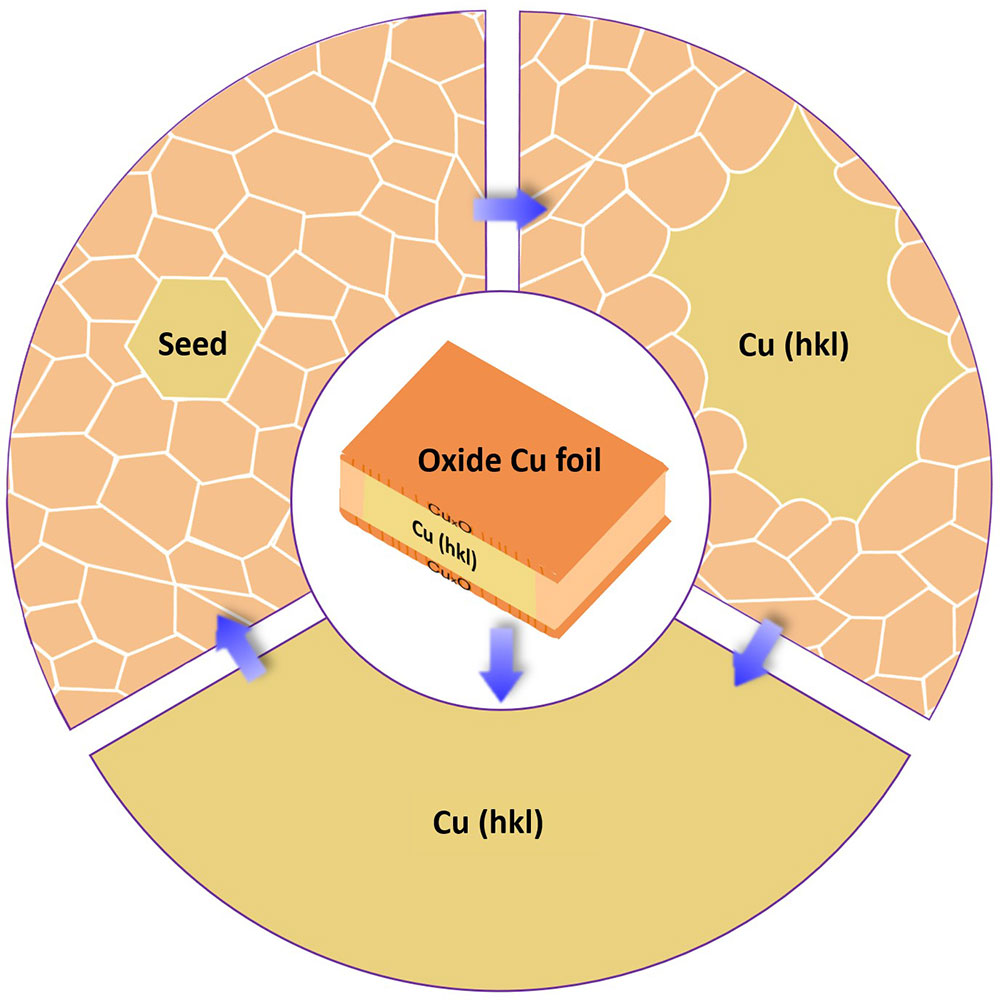 The research team has been exploring copper foils, one of the most popular substrates to support the growth of graphene and other 2D materials. Though they obtained single crystal copper (Cu) foils in their previous study (Science Bulletin, 2017, 62, 1074-1080), they were mostly Cu (111), whose surface is ultra-flat and thus less active than those with step edges and kinks. Through theoretical calculations, the research team concluded that Cu (111) tends to be formed more easily than other types, as the Cu (111) surface has the lowest surface energy and thus is the most favorable structure in nature. This reasoning led them to tune the surface energy of Cu foils in order to obtain single-crystal metal foils with desired surface types. 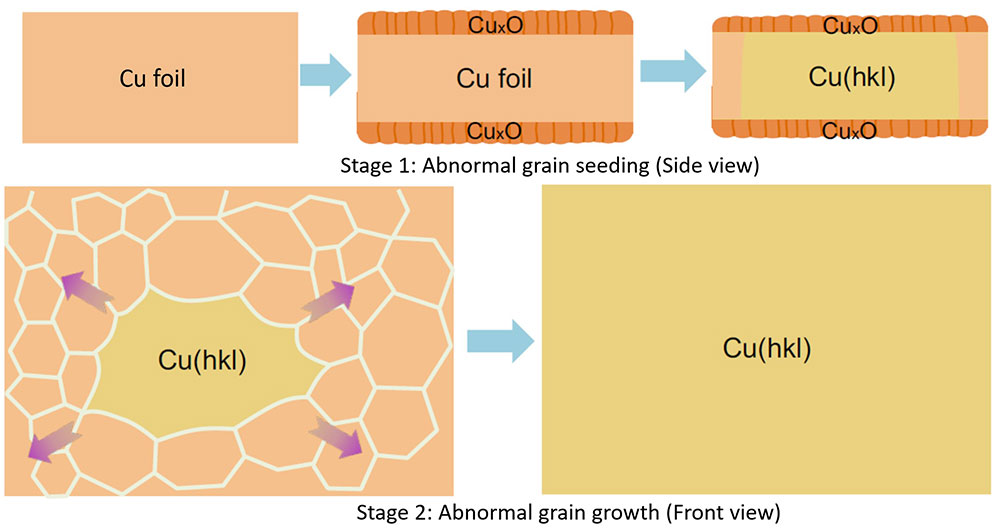 The research team cut out the “gene” of a small single crystalline foil and “pasted” the seed (gene) to create very large Cu foils with the exact same surface texture as that of the inherited one. To obtain single crystalline metal seeds with various surface structures, polycrystalline Cu foils were first oxidized and then annealed at a high temperature (1020 °C), which is close to the melting point of Cu, for several hours. When the Cu was oxidized, both its upper and lower surface were covered by a layer of copper oxide (CuxO). As the pure Cu surface disappears due to the oxidation, the two surfaces of a Cu foil were transformed into two Cu-CuxO interfaces after pre-oxidation. This alteration switched the driving force of annealing from surface energy to interface energy. “We have proved that, unlike that of the surface energies, the differences of the interface energies of different Cu foils are negligible, so the polycrystalline Cu foils can be annealed into many different types of single crystals randomly.” explains Professor Feng Ding, the corresponding author of the study.

Great theoretical and experimental efforts were devoted to understanding how these single crystalline Cu foils were formed during the annealing. Such a process can be understood in two stages. First, the surface structure of the seed was copied to the lower part of the large polycrystalline Cu foil and formed an abnormal grain (a grain which is much larger than others and has the advantage to grow up further) with a specific surface structure. Second, the growth of the abnormal grain finally results in a very large single-crystal Cu foil with the designated surface structure. 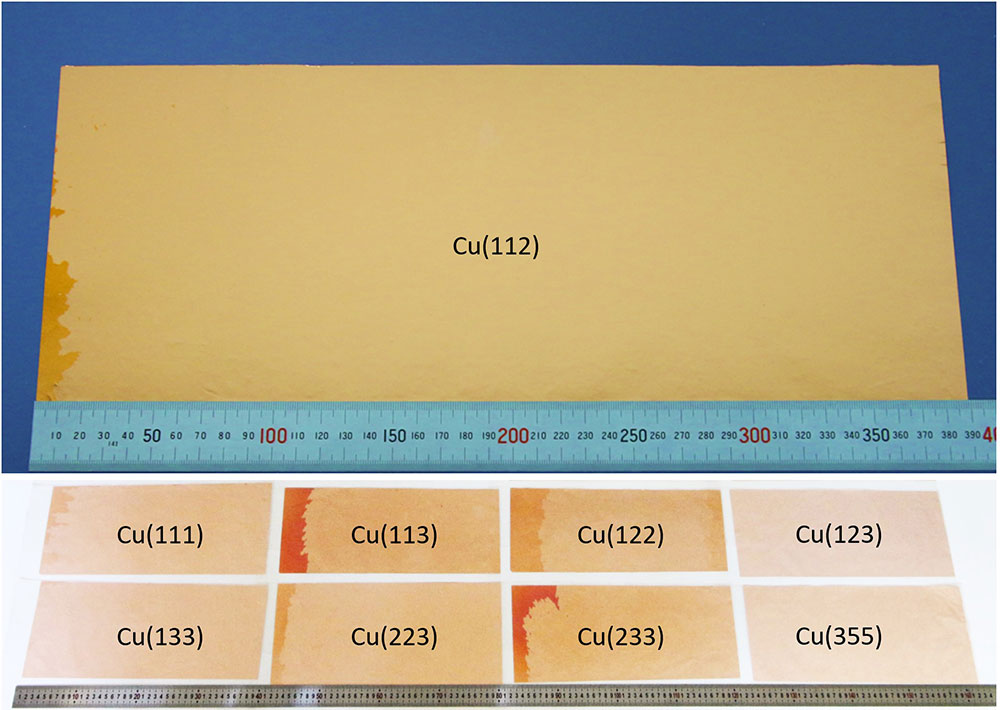 Besides the Cu foils, the researchers proved that this seeded growth strategy can be applied to fabricate large-area single-crystal foils of other metals, suggesting that various types of single-crystal foils of most metals could be available in the near future. “This achievement demonstrates a practical method for scalable synthesis of extremely large transition metal single crystal foils with different surface types, which was long desired for both fundamental science and engineering applications. Our achievement opens many possibilities, such as to use single crystal metals as conducting channels in micro-devices; use these single crystal metal foils as templates for controllable synthesis of various two-dimensional materials; grow large area molecular patterns with selected metal foils; and selectively catalyze chemical reactions on a foil surface with a specific structure,” notes Professor Kaihui Liu.

The research team will next aim to understand the mechanism of this oxidation-led seeding and seeded growth at the atomic level. Experimental efforts to synthesize various types of single crystal metal foils of different metals or metal alloys will continue, as well as exploring broad applications of these foils.