Can two layers of the “king of the wonder materials,” i.e. graphene, be linked and converted to the thinnest diamond-like material, the “king of the crystals”? Researchers of the Center for Multidimensional Carbon Materials (CMCM) within the Institute for Basic Science (IBS, South Korea) have reported in Nature Nanotechnology the first experimental observation of a chemically induced conversion of large-area bilayer graphene to the thinnest possible diamond-like material, under moderate pressure and temperature conditions. This flexible, strong material is a wide-band gap semiconductor, and thus has potential for industrial applications in nano-optics, nanoelectronics, and can serve as a promising platform for micro- and nano-electromechanical systems.

Diamond, pencil lead, and graphene are made by the same building blocks: carbon atoms (C). Yet, it is the bonds’ configuration between these atoms that makes all the difference. In a diamond, the carbon atoms are strongly bonded in all directions and create an extremely hard material with extraordinary electrical, thermal, optical and chemical properties. In pencil lead, carbon atoms are arranged as a pile of sheets and each sheet is graphene. Strong carbon-carbon (C-C) bonds make up graphene, but weak bonds between the sheets are easily broken and in part explain why the pencil lead is soft. Creating interlayer bonding between graphene layers forms a 2D material, similar to thin diamond films, known as diamane, with many superior characteristics.

Previous attempts to transform bilayer or multilayer graphene into diamane relied on the addition of hydrogen atoms, or high pressure. In the former, the chemical structure and bonds’ configuration are difficult to control and characterize. In the latter, the release of the pressure makes the sample revert back to graphene. Natural diamonds are also forged at high temperature and pressure, deep inside the Earth. However, IBS-CMCM scientists tried a different winning approach.

The team devised a new strategy to promote the formation of diamane, by exposing bilayer graphene to fluorine (F), instead of hydrogen. They used vapors of xenon difluoride (XeF2) as the source of F, and no high pressure was needed. The result is an ultra-thin diamond-like material, namely fluorinated diamond monolayer: F-diamane, with interlayer bonds and F outside.

For a more detailed description; the F-diamane synthesis was achieved by fluorinating large area bilayer graphene on single crystal metal (CuNi(111) alloy) foil, on which the needed type of bilayer graphene was grown via chemical vapor deposition (CVD).

Conveniently, C-F bonds can be easily characterized and distinguished from C-C bonds. The team analyzed the sample after 12, 6, and 2-3 hours of fluorination. Based on the extensive spectroscopic studies and also transmission electron microscopy, the researchers were able to unequivocally show that the addition of fluorine on bilayer graphene under certain well-defined and reproducible conditions results in the formation of F-diamane. For example, the interlayer space between two graphene sheets is 3.34 angstroms, but is reduced to 1.93-2.18 angstroms when the interlayer bonds are formed, as also predicted by the theoretical studies. 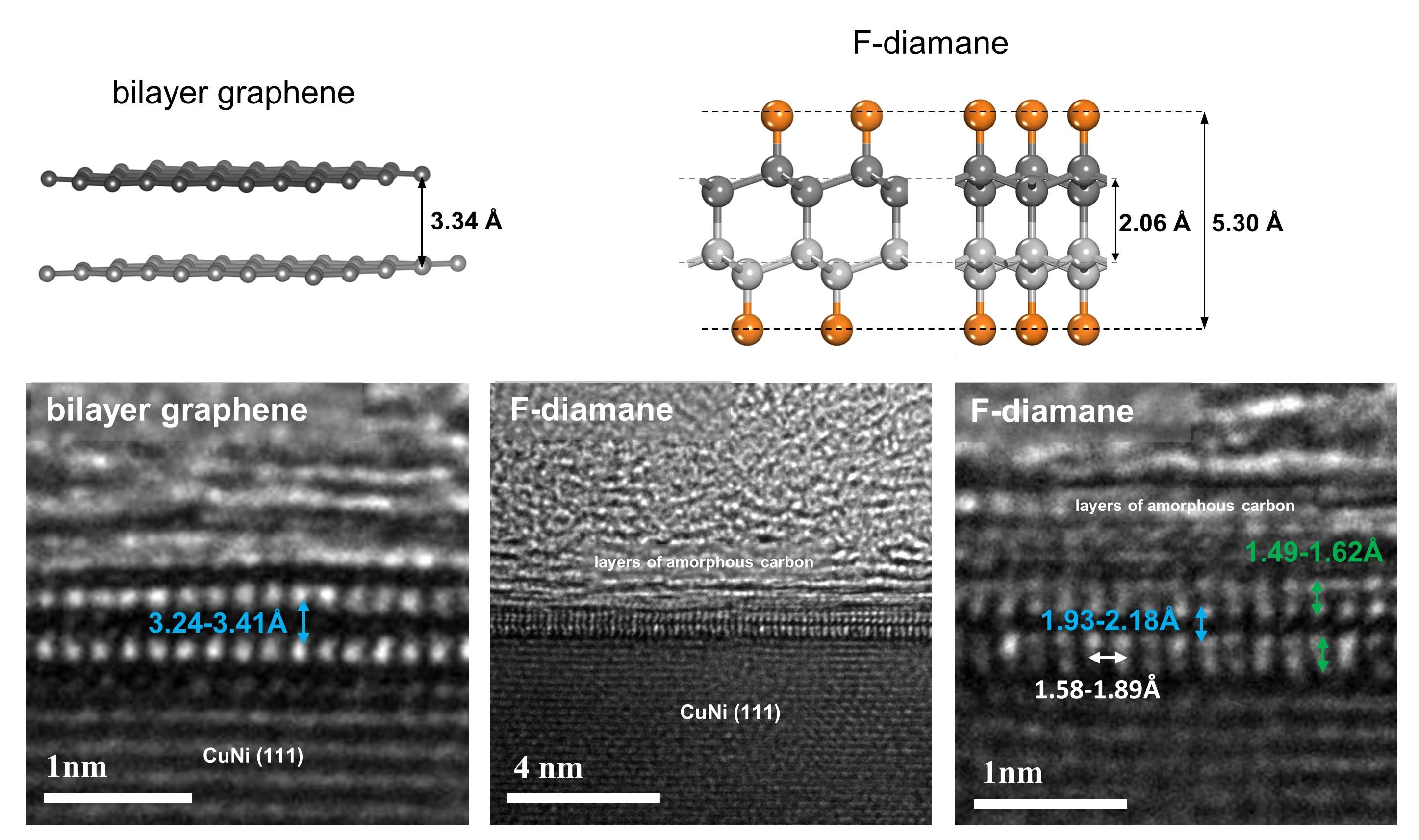 “This simple fluorination method works at near-room temperature and under low pressure without the use of plasma or any gas activation mechanisms, hence reduces the possibility of creating defects,” points out Pavel V. Bakharev, the first author and co-corresponding author.

Moreover, the F-diamane film could be freely suspended. “We found that we could obtain a free-standing monolayer diamond by transferring F-diamane from the CuNi(111) substrate to a transmission electron microscope grid, followed by another round of mild fluorination,” says Ming Huang, one of the first authors.

Rodney S. Ruoff, CMCM director and professor at the Ulsan National Institute of Science and Technology (UNIST) notes that this work might spawn worldwide interest in diamanes, the thinnest diamond-like films, whose electronic and mechanical properties can be tuned by altering the surface termination using nanopatterning and/or substitution reaction techniques. He further notes that such diamane films might also eventually provide a route to very large area single crystal diamond films.

- About the Institute for Basic Science (IBS) IBS was founded in 2011 by the government of the Republic of Korea with the sole purpose of driving forward the development of basic science in South Korea. IBS has 29 research centers as of October 2019. There are nine physics, two mathematics, six chemistry, six life science, one earth science, and five interdisciplinary research centers.